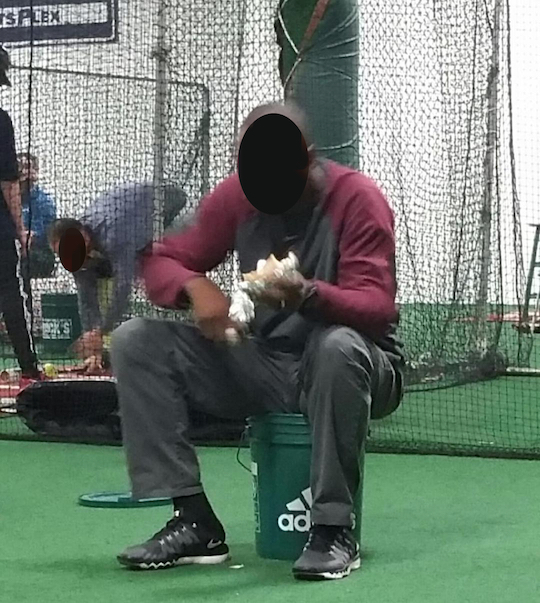 I hope the title of this post doesn’t offend you as much as the featured pic on this post. (In case you can’t see the entire pic: This “private baseball instructor,” is eating a sandwich as he pulls baseballs from a bucket – that he’s sitting on – while one shoe hangs halfway off his foot.

As ridiculous as this image is, for me it doesn’t compare to the near-complete lack of value the typical private lessons brings to the table.

Yes. I know. Where do I come off making that statement, seeing that for nearly 20 years, I gave tons of private lessons? I mean, it’s what I did. I’m sure many people reading this know me through our private lesson history.

What you might not know: I have moved away from private lessons in the past few years. Yes, I still do a few here and there for players not quite ready for the way I train ball players now. But the simple fact that at the end of the day, private lessons don’t do anything close to what you’ve been led to believe they do.

Don’t believe me? Well then. Let’s take look at your typical hitting and pitching lesson.

Warm Up – A few trunk twists followed by pulling your arm across your chest a few times and you’re ready to go!

Tee Work – You’ll probably spend a lot of time here, swinging, talking, and doing a bunch of drills that never translate to your actual swing. If not, don’t worry. Your lesson will be filled with pointless drills at some point.

Short BP – If you’re lucky. That’ll depend on the instructor’s pitch count for the day, leading up to your lesson with him.

Constructive Criticism – Every bad ball you hit will be followed with a standard correction cue that may or may not apply. Each good ball struck will confirm exactly what that coach told you to do, which may or not be true at all.

Video – If you’re really lucky, your instructor will use his phone for video and not texting while you pick up the balls.

Final Swings – will be almost guaranteed to be great, because the instructor will do all he can to put the ball in your wheelhouse, in the hopes that you’ll feel good about yourself and assume the swing means you’re making progress, and will hopefully lead to you taking more lessons with him.

Warm Up – Unsupervised stretching…tubing possibly. (I’ve seen very popular instructors tell their pitchers to “do what you gotta do to get loose,” or just have them start playing catch right away.)

Drills, drills, drills – What’s a pitching lesson without ridiculous drills that have nothing to do with how the body actually works? (Even regular speed video proves this!)

Bullpen Time! – How else will you learn how to pitch (in December)? You’ll finish with a strike. The instructor will make sure of it.

Video – I’ve heard one too many pitching instructors claim they can see all they need to by what the ball does.

Constructive Criticism – Just like a hitting lesson, if you miss your location you be corrected with some accepted gibberish. Hit your spot, well then, your “mechanics” were perfect, right?

I will say, if that coach is master of positive vibes and confidence-building praise, that can go a long way. There’s no denying that. But once that fades (and it will once you have your first sub-par game post lesson) what are you left with? You haven’t really developed any particular skill. You’ve basically paid someone to throw you BP, or watch you throw a ‘pen, and compare it to your last lesson with them. That’s it.  And what’s the typical private lesson run these days? I’ve seen them range from $45 – $60…for 30 minutes. What if you could train, actually train to develop your skills as a baseball player?

What if you were handed a structured program tailored to meet YOUR needs, and not just some cookie-cutter, drill-filled tear-it-out-of-a-magazine program?

What if you committed to that type of a program, and by the end of the training become your own coach, and be able to make your own corrections on the fly?

What if you could train 90 minutes a day, 3 to 7 days per week for two or three months, see concrete results backed by video and baseball specific metrics, and pay significantly less per session than the cheapest private lesson?

I know of a place that does just that… 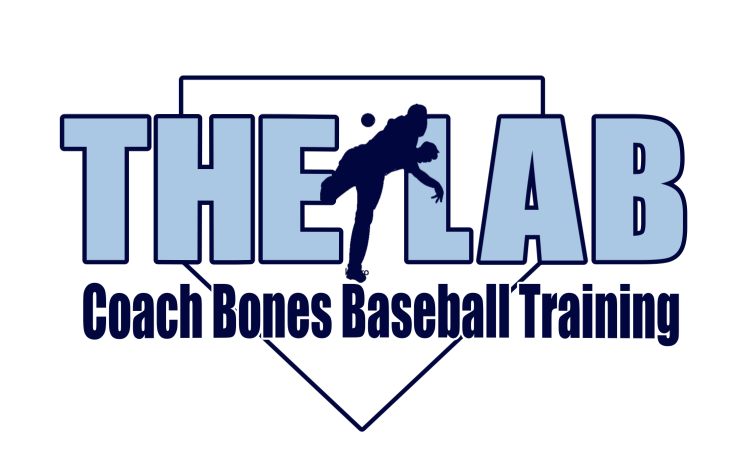 Way back in 1997, I gave my first “private lesson,” to a 15 year old pitcher/hitter, shortly after his freshman year in high school. After getting released a few months earlier and immediately falling into the high school coaching ranks, I didn’t know that giving lessons was something I even wanted to do.

But since his dad knew my Dad… I really didn’t have a choice.

Fortunately for me, the ball player turned out to be hard-working, smart, extremely talented, and oh-by-the-way, a future big leaguer.

But looking back, it wouldn’t have mattered if he was simply a 15 year old that wanted to start on the JV team the following season.

As it turned out, I loved being able to share whatever information I had at the time with any ballplayer wanting to work hard and chase their potential. Giving lessons outside on open fields, cages, and bullpen areas, I didn’t have any concrete time limits for lessons. (In fact, my earlier ball players and parents would often joke about the fact that my lessons always went at least 30 minutes long.) I didn’t care how long the lessons went. My only goals were to teach the game, work on the particular baseball skill, then condition each player with various exercises that usually consisted of bodyweight or medicine ball routines.

But once I had to move my lessons indoors, I had to be more mindful of the times, seeing that players were now scheduling specific times for 30 and 60 minutes work outs.

The most common lessons ran 30 minutes…and I couldn’t stand them. Sure. It allowed me to do more lessons each night, which meant I made more money. But I didn’t feel like the players were getting everything I had to offer.

It didn’t take long for me to strongly suggest to all my players, to arrive at least 15 minutes prior to the lesson (in order to take care of the mandatory set of warm up exercises so they wouldn’t eat into our scheduled 30 minute workout) as well as 15 minute post lesson (to make sure the players “cooled down,” appropriately).

That tweak worked out great…until I did my first “training program,” and realized the giant gap in development between the training program group compared to the private lesson ball player.

I was convinced that the training program model was the only way to truly develop ball players. So I tried to pitch the change to both the owner of the facility I did lessons, as well as the parents. Unfortunately, the concept was met with a less-than-excited reaction from both. The bossmen pointed out how much money was being made by individual 30 minute lessons compared to group training that could take up to 90 minutes. The majority of parents valued the one-on-one relationship between player and coach, and also felt that the once-per-week tune up was more than enough for their ball player to improve.

So… I spent the next decade-and-a-half giving the people what they wanted, instead of what would make a much greater impact on their game.

Finally, I just couldn’t take it anymore. After completing a 10 week training program (I had to beg to get approved by the big wigs), I knew that I couldn’t keep this from the hungry ball players looking to get the most out of their ability.

I broke out on my own, found an available warehouse, and built The LAB.

The LAB was designed to give serious players every tool they need to realize their full potential.

With very strong hints of my original lesson from 1997, the set up of The LAB combines warm up/ cool down areas, baseball-specific locations, as well as a dedicated strength training space.

Those elements alone would be more than satisfactory for most ball players. But I wanted to take my facility to a whole different level.

Using specific exercises that has somehow earned me the nickname, “Coach Miyagi,” ball players are taught the correct ways to move without confusing verbal cues.

On top of that, the technology at The LAB clearly sets this facility apart from pretty much anything else you’ll find. The HItTrax system is being used every day, including it’s high speed camera and instant emails containing videos from specific workouts, that charts progress as well as all the metrics needed to back up the process we use. Rapsodo Baseball provides the same advantages for each pitcher as well. Radar guns are used to mark progress in other areas of the facility. High speed cameras are being added on nearly a daily basis.

Aside from seeing the incredible progress the first wave of LAB players have made, the biggest thrill I get is the one main comment from former players: “If only this was around when I played…”

It’s here now…and waiting for YOU to make the commitment and GET AFTER IT!